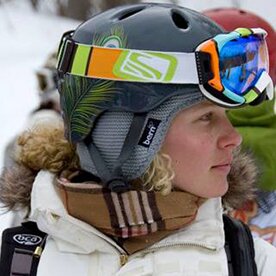 Luke was born in Texas, but he has skied his entire life and has deep ties to the snowy mountains of the east and west coast. After debuting as an actor in “Bottle Rocket” and being the star of many great films like “Legally Blonde,” “The Royal Tennenbaums” and “Old School,” Luke has expanded his range to become a writer director and producer of his own films while continuing to act in others.

It was on a trip to the island of Marthas Vineyard where he met Charley Lodi, RAMP consultant and oldest son of co-founder Edie Kilchenstein. After years of travel and adventure together, Luke and Charley began working in film development, production, and even acting together. A large part of their writing and development process takes place during trips to locations where creativity flourishes. It was on ski trips to Mammoth, Aspen, and Big Sky where some of their greatest stories were born and developed. Luke and Charley are always on RAMP skis and often in RAMP team gear.

It is no coincidence that the goals and motivations for a superior, more sustainable, truly American product have aligned Luke's production team and RAMP's production team. This mutual bond is the core of the Riders Artists Musicians Project: creative drive, responsible business practices and a passion for great adventure has brought us all together.

"RAMP skis have made it possible for my skiing to progress to a higher level. For the first time in a long time, I have been able to ski any terrain I want and finally get into some truly deep powder."