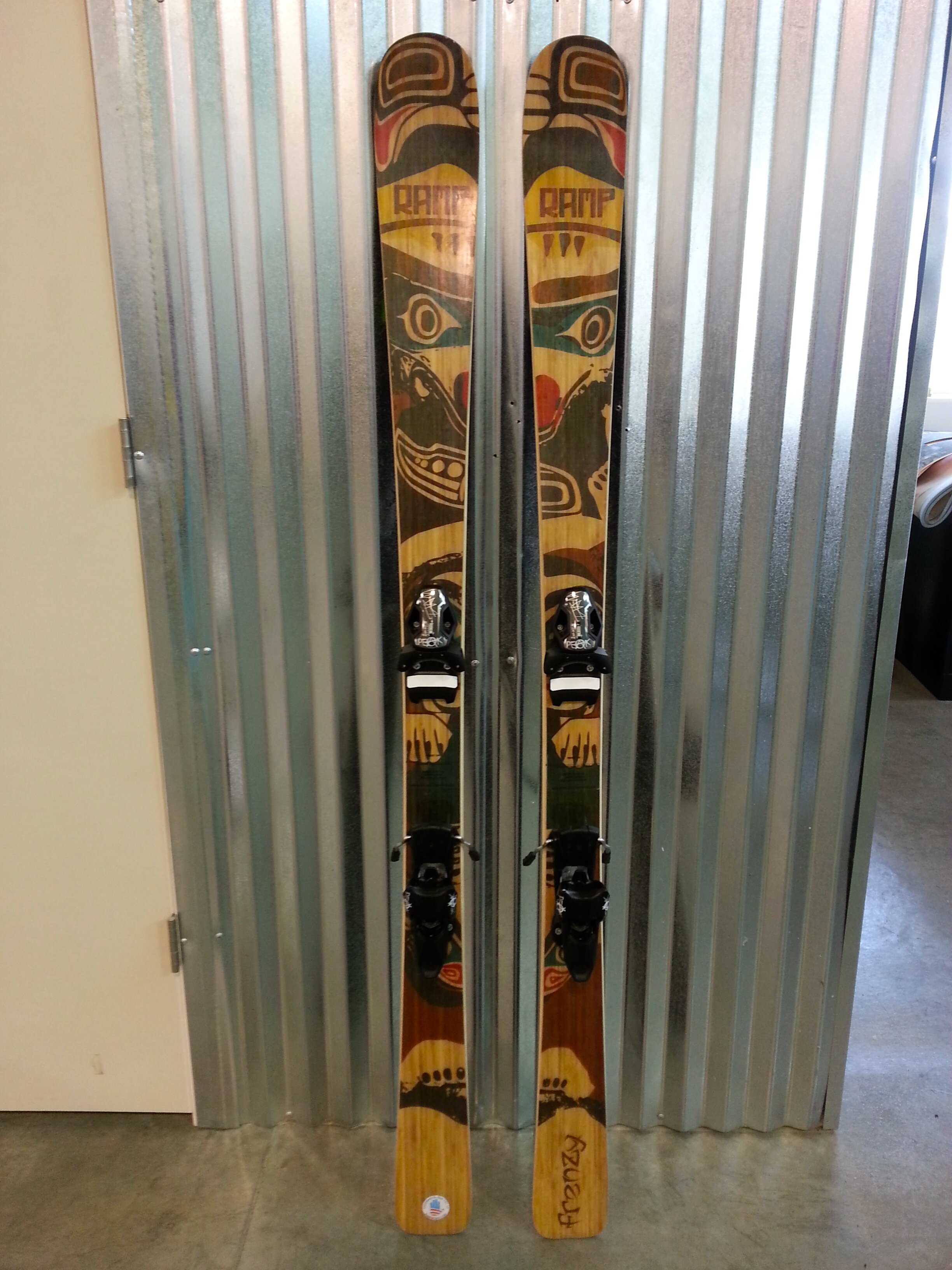 Conditions: Many wind blown areas, 20-30 degrees F. 4-6 inches of wet snow two days prior, wet especially at lower elevations, causing the snow to become even softer once in sunlight. With higher edge degrees and edge angles, the chances of loosing your downhill edge and "hipping out" becomes greater as there is nothing to "hang onto." The snow simply falls away. So, it forces one to bend his knees to a great angle, lowering his center of gravity, and keeping his weight literally over the skis. It is much harder to throw one’s feet out from under oneself and grab an edge. So as my race coach used to say, "Keep that inside shoulder up!" Took a casual cat track over to the second lift and already knew this ski was going to be fun. I rode up and down the embankments and carved it smoothly and evenly at the lowest of speeds with great ease. Being able to load the ski and "oli" or jump into the air or over an obstacle without a lip or ramp of any kind was natural. There is definitely some energy stored within this core.

Wizard/Tycoon Trails: Both ranked a double blue, these are the long groomers Deer Valley boasts about. There are several knolls and the final pitch runs for at least 400 yards. I pointed the tips down the opening fall line and laid down the initial carves—simply splendid. I found them to be nearly as smooth as a Stormrider(By Stokli ™), and ferocious as a slalom ski. Born for high speeds, no doubt. Let's open it up a bit: Absolutely zipping over the second knoll, I lost the ground for several meters underneath an inspiringly slow transition. I landed a bit right-foot heavy and already had the Frenzy’s set to a great angle. Almost simultaniously I was kicked into the back seat as the downhill ski shot out from under me. This is when I found the natural flex point of the ski. It felt a bit set back on the heels, but maybe I was meant to ski this one standing tall, with my chest in the air and hands high. But I regress, setting the woods underneath the fall line, I let the ski run into a full-on super-G turn. I pushed once, pressuring the ski softly, increasing the force to manipulate a slightly greater reverse-camber. Then I pushed again, and again pushing hard on my left foot until I reached the other side of the run, 100 yards downhill and snapped the boards around for another high-speed turn. Standing up a bit, I dropped my weight back and the ski rebounded with a tremendous amount of spunk. I was duly impressed and wondered where this set of timber could take me. These skis will run a plethora of tight or open meter turns at varied speeds because of their natural ingenuity. Versatility on the groomers—check. The wind was whipping and depositing a decent layer of dust atop the mogul ridden bowl near the top of the Wasatch Lift. So I dropped in.

Let's take a step back and look at the overall construction of these boards. She may not boast an underfoot that guarantees a pleasurable powder day, but thats exactly what a 80 underfoot does—guarantees a disposition of hard work for pretty turns. It forces one to be extremely technically correct to carve a decent railroad track. RAMP is attacking this the other-way-around, going with a small underfoot, and letting the tip and tail take care of the 4-8 inches. Although I nearly dived the tip into a fluffy bump and went out the front, 6 or 7 rather superb knee shots preceded this not-so-close fall before the true behemoths started. I traversed across the top of the bowl at around 20 mph throwing big left-footed turns across this untouched gift. The Frenzy’s 80mm waist allows you to get into the snow, but the stiff and fat tip will always keep you afloat.

The result: Control of how deep I wanted to drop, or rather, how high I wanted to bring the snow. So no worries you crazed fans of the Rocker. It may be a gift when surfing 12-18 inches, but your ski is basically useless on the groomers. (The overkill is apparent even in 1-4 inches of fresh powder from a tip and tail rocketed ski.) Light powder quiver, yep.

Around noon I gave it one more run down Wizard, knowing the crud that lay ahead of me. Making sure there was nothing but an endless slope of smooth snow below my fall line, I was ready to slide endlessly. Throwing my legs out from underneath myself, I thought, "There is no way this pebble-like crud is going to hold me." Then, I opened my eyes and smile came across my face as my knees came up for yet another weightless transition. Thanks RAMP, for making skiing fun again.

Posted in News By